We have just uploaded the 4 February release of Spooky2 here:

The updated Spooky2 User’s Guide, the Spooky2 Starter Pack, and the Frequencies database have also been uploaded. There are also new editions of the Spooky2 Molecular Weight Full and Small databases.

New: Base Pairs database for human, animal, and plant pathogens. Installed automatically together with the small version of the Molecular Weight database and the Main database. This gives access to a total of just under 24,000 programs.

New: biofeedback scan results can now be recalled if the window was closed without saving.

New: a list of non-protected programs can now be saved as a new program.

New: generators whose start times have been delayed now display a countdown in seconds on their buttons.

New: the “|” character adds a new line in the Spooky2 database Program Information.

Improved: Dual Weighted Sweeps with less than 100% Spectrum – thanks to Walt for his work.

Improved: running generator buttons now colour-differentiate between Shadow (slaved) and Master generators. Shadow generators are now dark green, and Totals in the Generator Control Panel are those of the Master generator.

Improved: all built-in protocol guides renamed for easier identification in the preset hierarchy.

Improved: User preset collection folder now created on the fly, even if deleted.

Fixed: saving settings for generators with no programs loaded. This allows complex Shadow generator settings to be saved.

Fixed: Remove Duplicates operation was affecting generators for which it was not intended.

Fixed: biofeedback scan BPM & HRV display when Samples/Step is greater than one.

Databases: Almost all CUST programs moved into XTRA database to allow the CUST designation to apply only to user programs. A few remain for which special arrangments will be made in the next release. Almost 350 new programs added to Main database. 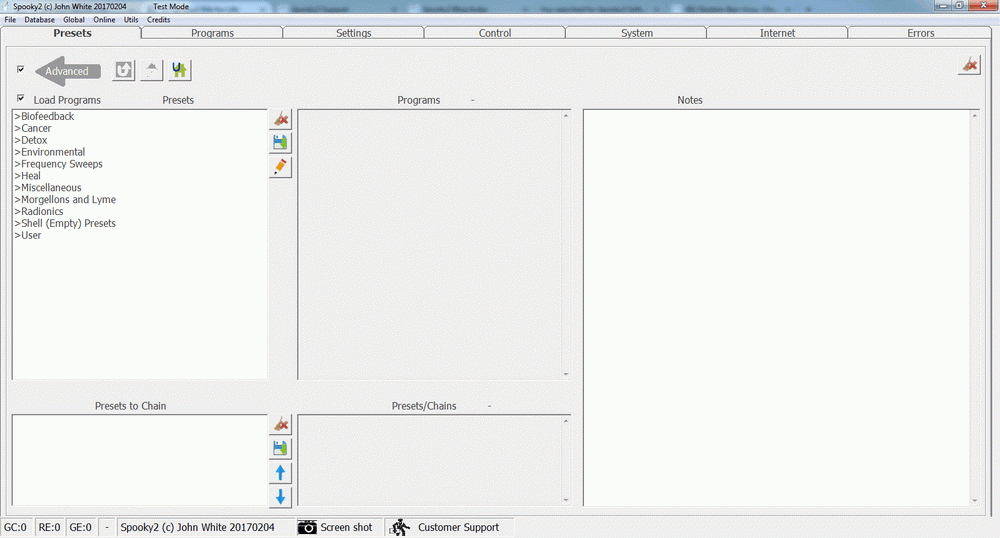