If you are driving the generators during a power outage from a desktop PC without backup power, then the PC will also shut down.

Aside from the OS maybe complaining, there should be no issues encountered.

If you are driving the generators using a laptop which has battery backup, then there is the possibility that the laptop will continue to send power to the generators which no longer has power from the mains.

Under this condition, there was potential to overhead the USB comms chip. The spare comms chips that are included in the kit are provided to replaced any chips that may become damaged if this occurred.

The good news is that most generators since the start of 2016 have been updated to not allow power to back flow from the PC/laptop in case of power loss.

If you have a generator that is older than 2016, then it may still be a concern.

Some users add a UPS (uninterrupted power supply) to power the generators to avoid any potential issues.

Other may run their laptop without a battery (for those laptops that can) so that it too shuts off when power is lost.

This worst that can happen is that the communications chip overheats and is damaged.

If you already know there would be a power outage in a few hours, you can shut everything down using the global tab. When the power is restored, you can go to the global tab and click start. Everything starts up without having to load a single program. 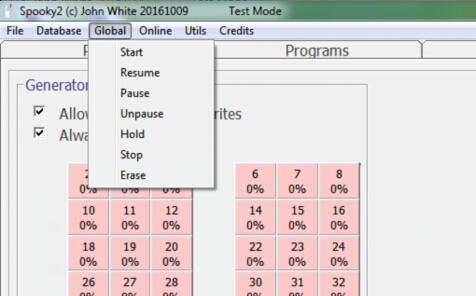