Do you believe that a part of the bell is knocked, the whole bell will sound together even if a bell is divided into many pieces and placed everywhere in the universe?

That’s what we call it quantum entanglement. Once two particles become entangled, when one changes, it is immediately reflected in the other, whether they are in the same laboratory or hundreds of millions of light-years apart. Einstein suspected quantum theory, but scientists found it was one of Einstein’s few but perhaps biggest mistakes.

The History of Quantum Entanglement

In 1972, John Clauser and Stuart Freedman first conducted an experiment of quantum entanglement, but too many vulnerabilities of the experiment were suspected by people.

In 2015, scientists at the Delft University of Technology in the Netherlands demonstrated the existence of quantum entanglement by using microwave pulses and lasers to make electrons entangled. While the experiment claims “no holes”, some scientists were not sure.

Until April 25 2018, a team led by Mika Sillanpaa, a professor of the Aalto University in Finland, successfully entangled two separate vibrating tympanic membranes. For the first time, Human beings can see the phenomenon of quantum entanglement.

The Recent Research of Quantum Entanglement

Paul-Antoine Moreau, physicist of the University of Glasgow’s School of Physics and Astronomy, and his team captured the first image of quantum entanglement. Although quantum entanglement has been tested and used in some fields, it has never been captured in a single image. The appearance of this image undoubtedly caused a sensation around the world. 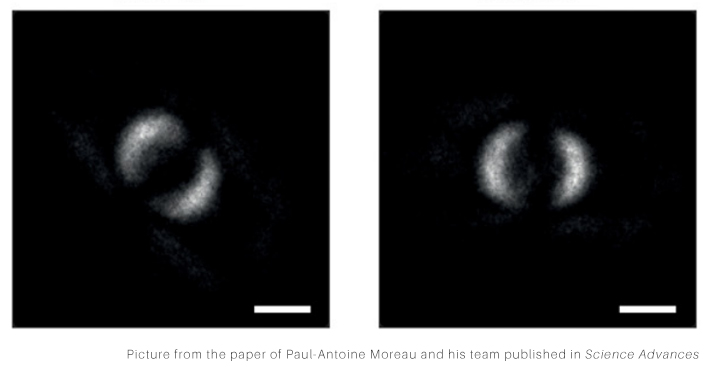 So, how did scientists take the incredible photo?

This brings us to the famous Bell Inequality. In 1964, Bell put forward the basic idea of Bell’s Theorem in the form of inequality: No physical theory of local hidden variables can ever reproduce all of the predictions of quantum mechanics. Bell’s inequality makes the non-locality of quantum entanglement possible to be verified by physical experiments for the first time. Thus, the Bohr-Einstein debates, which were only on the philosophical level, can be quantitatively tested experimentally. In short, the violation of bell’s inequality proves the existence of quantum entanglement.

Based on this principle, the researchers designed a system that emits entangled photons from a quantum light source toward the “unconventional matter” shown on the liquid crystal material, which changes the phase of the photons as they pass through.

They placed an ultra-sensitive camera which is capable of detecting individual photons. When detecting the photon and its entangled twin exist at the same time, the camera captured the first precious image of the photon entanglement. The image presents a ring shape which shows two photons reflect off each other. 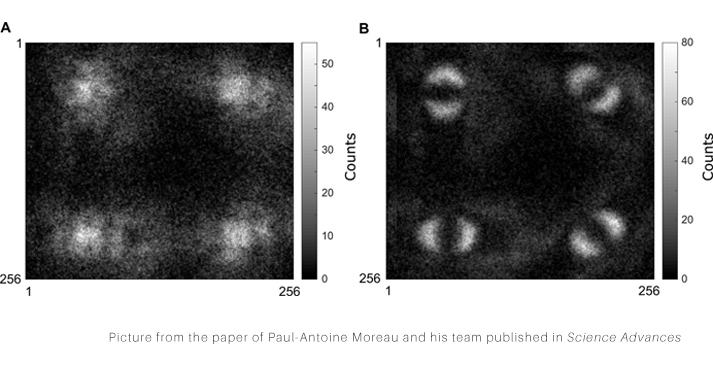 Paul-Antoine said the image was “an elegant demonstration of a fundamental property of nature”.

“It’s an exciting result which could be used to advance the emerging field of quantum computing and lead to new types of imaging.” He added.

The paper of Paul-Antoine Moreau and his team published in Science Advances：
https://advances.sciencemag.org/content/5/7/eaaw2563?tdsourcetag=s_pctim_aiomsg

The Future of Quantum Entanglement

The Second is encryption techniques for transmitting information. As computer technology becomes more powerful, traditional encryption methods are being challenged. Security issues in areas such as the Internet and e-commerce which require strict confidentiality of information, are becoming more critical. The technology could lead to practical applications such as the “quantum Internet”.

Besides, the technology of quantum entanglement can study the formation, remission, abnormality, recovery and other stages of diseases from the perspective of biological photons in the medical field. This means that people will be able to monitor their health with the technology, controlling the disease at an early stage and even killing the pathogenic factor of the disease before symptoms appear.