Using sine wave to scan can avoid harmonics when looking for what frequencies to run.
When you use anything other than a sine wave, you are also potentially getting hits from waveform harmonics.

Using the sine wave, you get your biofeedback results based only on the frequency scanned. Octal resonance will account for any results that are due to frequencies outside the scan range based on shared common nodal points.

Example: All C notes on the piano sound the same and have many properties in common. This is octal resonance. The C note and the G note do not. They are not the same in any shape or form. G is the 3rd of C.

Using anything but a sine wave to conduct the scan opens the door for results based on a harmonics induced by the waveform. One can no longer guarantee the results are due to the fundamental – instead the result may in fact be from a harmonic that was generated.

What will happen if you change waveform when applying the scan results?
When applying the results from a biofeedback scan, many will change the waveform. What then happens is you run into the distinct possibility that you do not generate the frequency that resulted in the hit to start with, or if you do, it has lost too much power to be efficacious.

Example: I scan using a square wave. I get back 1000 Hz, but my results were actually based on the 13th harmonic (odd) which is still within reasonable power levels. I use a standard killing shell preset which uses the inverted sawtooth, producing a nice spread of even and odd harmonics. The 13th harmonic is no longer 6 levels away from my fundamental, but is now 12 levels deep, and power is insufficient.

However, if your scan was conducted using only the fundamental and not allowing for waveform induced harmonics, it really doesn’t matter what waveform you use to apply. If my hit was based on a MOR that was in the 2nd, 3rd, or 4th octave, I’m still producing the fundamental and they will be targeted. Harmonics play no vital role.

So there’s no need to make this more complicated, requiring specialized settings to scan and then consequently required for application to ensure the same harmonics were generated.

As for the current biofeedback scan presets, they should have never been changed to use square waves in the first place. They were originally sine wave based scans.

Conclusion
The above isn’t all that technical. It was just long. So let me try to shorten it.
1. Use of a sine wave means the hit is for the frequency you scanned.
2. Use of anything else does not guarantee this. To prevent issue, if you scanned with a square wave, you should apply using a square wave.
3. The scan results are not accurate if you use another waveform to scan. Only makes isolating what did the work harder.
4. Applying the scan results using another waveform if not based on a sine wave, could result in less than ideal efficacy. I’m leaving out the reason why, but it is explained above.
5. Sine wave based scans can be freely applied using another waveform as it provides hits based on one single frequency only (the fundamental). 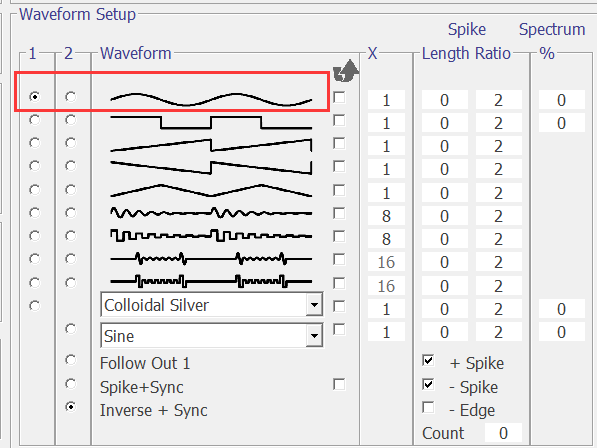