Some forgotten facts were once common knowledge. Almost 100 years of ceaseless marketing and lies has convinced the public that drugs are the best way to combat illnesses – a lie becomes the truth if repeated often enough. Why? The most effective way to control any society is to get – and keep – an iron grip on the health of its members. Sick people can’t put up a much of a fight.

It’s time for a change. Spooky2 wants everyone to take control over their own health. It all begins with education. And the truth.

Before money dictated health matters, cheap remedies were effective. The ancient Romans used plain honey to prevent cuts from becoming infected. Burdock (a common thistle) has been used for treating chronic diseases such as diabetes, and AIDS. It is a blood purifier that can also be applied directly to the skin to treat problems such as eczema, acne, and psoriasis.

No profits can be made from weeds, so drugs were created. The term “side effect” was invented to make drug dangers appear unimportant. The correct term should be “unwanted effect”. The US Department of Agriculture’s Division of Chemistry (later renamed the FDA) questioned the effectiveness of many of the time-proven cures. Finally, the big push came to make most natural cures illegal.

Before refrigeration was common, people would drop a silver coin into their milk jar to keep the milk fresh for longer. Silver cutlery was – and still is – used to combat bacteria. Silver has an amazing ability to kill viral, bacterial and fungal organisms. An independent test by Larry C. Ford, the MD of the Department of Obstetrics and Gynecology from UCLA School of Medicine, concluded that colloidal silver kills more than 650 bacteria, fungi, parasites, molds and fungi, all of which have the potential to cause diseases.

Silver is a threat to drug sales, so doubt needed to be placed on its safety. Reports of two people who drank massive amounts of incorrectly-made ionic silver were widely distributed. Their skin had turned blue. These reports omitted the dangers of common drugs such as Paracetamol, which can cause devastating liver damage if just a few pills too many are taken regularly. This drug can be bought at any supermarket without prescription.

In 2009, the US Centers for Disease Control and Prevention (CDC), a notoriously conservative (and some would now say untrustworthy) body released a report which showed that prescription drugs killed 37,485 Americans in that year– versus 36,284 killed in road traffic accidents. Common drugs believed by many to be innocuous caused more deaths than heroin and cocaine combined in that year.

In contrast, Silver is safe and effective. It has been used for over 2,000 years to prevent sickness and heal. Our bodies need silver to function properly.

It’s important to understand the difference between colloidal silver and ionic silver.

Colloidal Silver is small silver particles suspended in a liquid. These particles are stable and suitable for both external (skin) and internal use. It is the most desirable form of silver solution. Spooky2 can make true colloidal silver.

Ionic silver is silver atoms dissolved within a liquid. The atom size is much smaller than colloidal silver particles. Each atom is missing one electron, making them highly reactive. Ionic silver is converted into undesirable silver chloride when it encounters body salts, so may be suitable for external (skin) use only.

Marketing hype has created confusion. Most “colloidal silver” being sold and made is in fact more than 90% ionic silver which is only suitable for topical use. Once inside the body it becomes ineffective. The particle size of ionic silver is one molecule.

Get everything you need to make top-grade nano-particle Colloidal Silver here:
https://www.spooky2-mall.com/product/spooky2-colloidal-silver-generator-kit/

Follow the simple steps on the next couple of pages to create true nano-particle colloidal silver with a high silver content.

The silver particle size will be very small. This increases effectiveness.

1. Fill a glass or ceramic container with distilled water. Do not use tap or filtered water. These will almost certainly contain unwanted impurities and chemicals.

2. Place two clean and shiny silver rods in the water. They must be more than one inch apart and larger than 14 AWG in thickness – 9 AWG is ideal because the surface area is greater.

This makes smaller particles and has the bonus of being stronger. 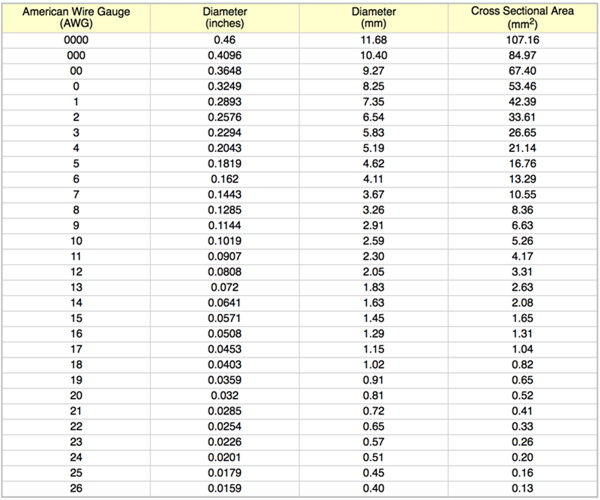 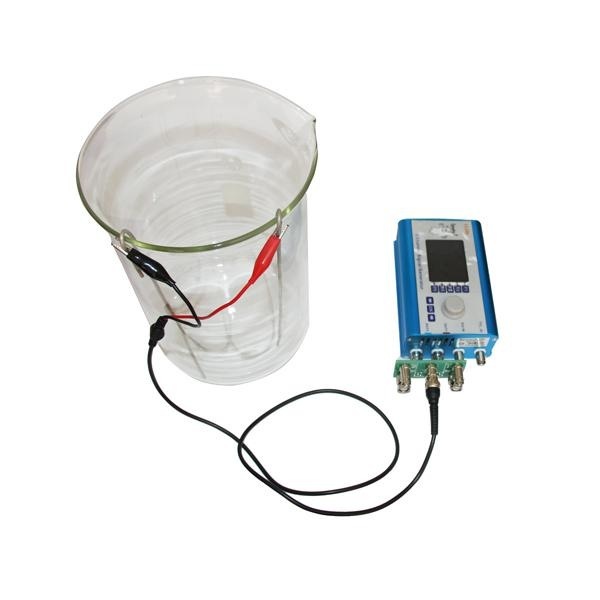 4. Launch Spooky2 and use the calculator to estimate the Dwell you need to enter for the Colloidal Silver Generation program. You may have to go to step 5 and briefly run the generator to measure the Current (mA) with a multimeter so you can enter it in the calculator.

The four fields under By Calculation are interactive. Changing a value in one will alter the values in the others. Enter your numbers in the top three to find the Dwell Multiplier you need to enter in the Program Options pane.

The total time needed to make your CS will be shown beside Duration.

The two fields under By Measurement are not interactive. Enter the TDS of your distilled water before you start, then the TDS of the final product (or during production). The Estimated PPM will be shown beneath.

Note that a TDS (Total Dissolved Solids) meter will NOT measure the colloidal silver content of a solution. Colloids are not dissolved solids. 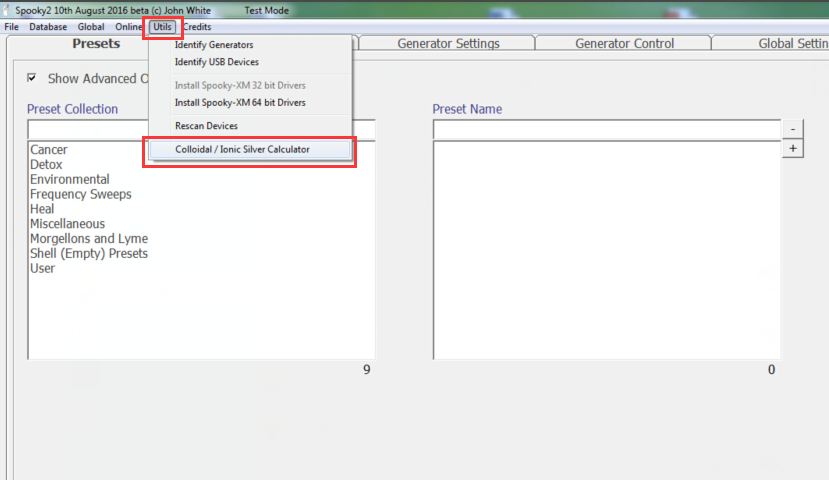 If you don’t have a multimeter to measure the current, simply make the supposition that your system will consume 0.2 mA. This is a very rough average estimate that assumes you have two 9 AWG rods one inch apart submerged to a depth of 12 inches in distilled water.

5. Load the JW–Colloidal Silver Generation Preset and the Colloidal Silver waveform. Enter the estimated dwell into the Dwell Multiplier field and start the Channel. The waveform has been designed to produce very small silver particles of varying size. Do not rush the manufacturing process. Slower is better. Now start your Channel. And good luck! 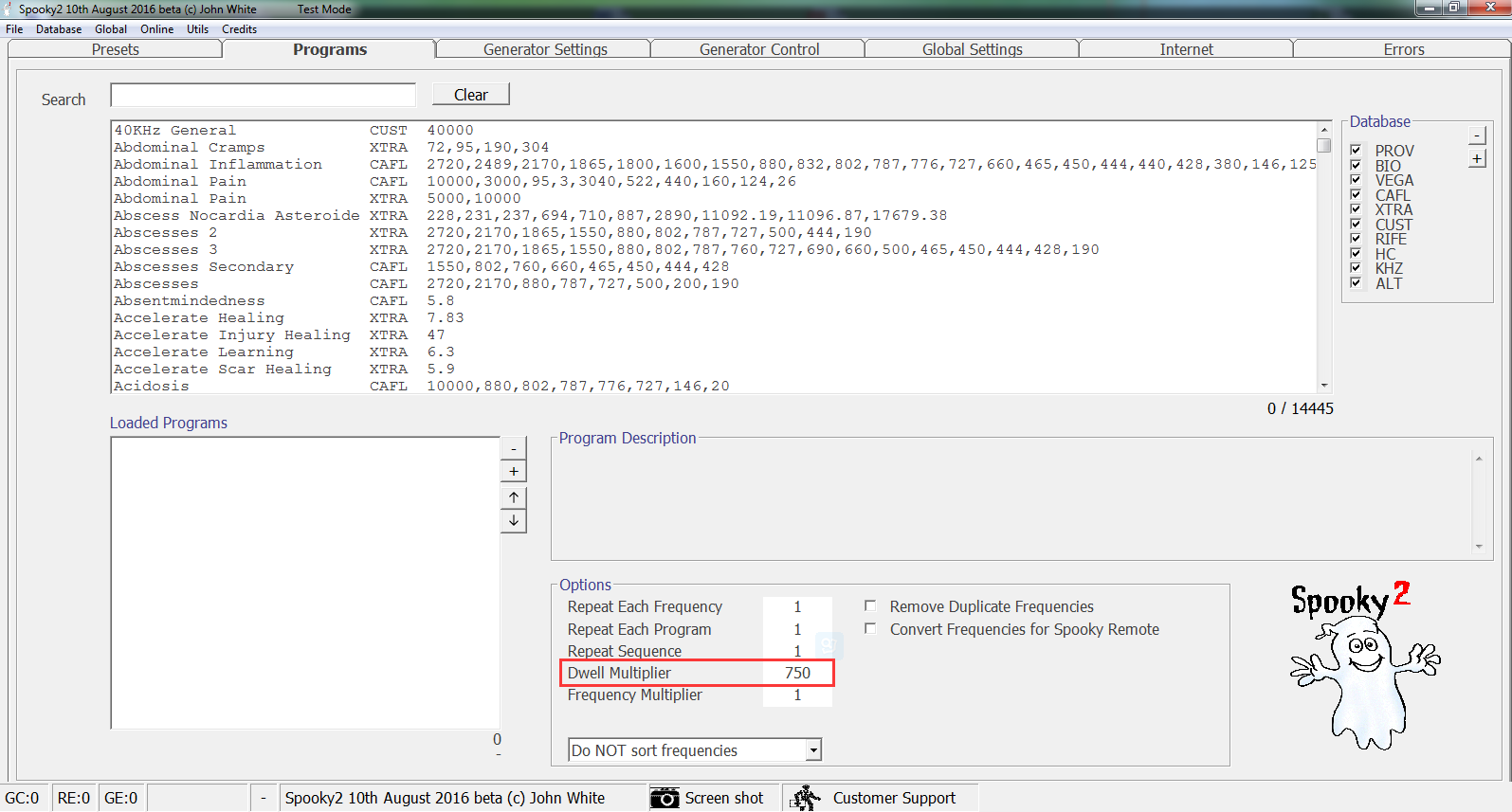 1. The triangular shaped waveform uses pulses of varying amplitude DC. The amplitude sets the silver particle size drawn off the silver rod. Differing sizes of particles will be drawn off, each nanometers in size.

2. The waveform has a 10% DC offset that speeds up the manufacturing time.

3. The silver rods do not require cleaning. Swap Waveform inversions will turn the silver hydroxide buildup on the anode (+) into plated silver that sediments to the bottom of the container. This prevents contamination of your silver solution. 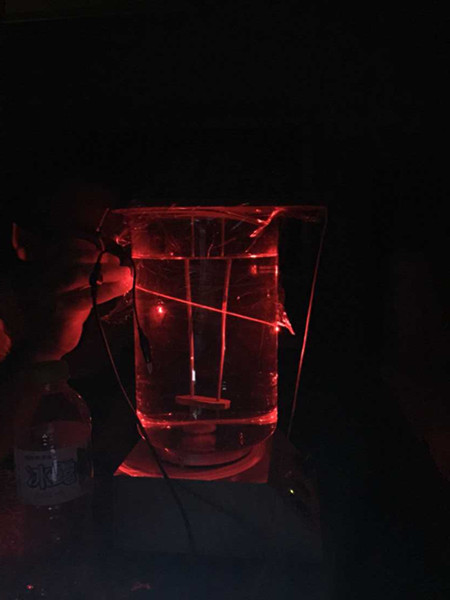 “It’s hard to find the strength of CS. People often use a TDS meter. However, colloidal silver is silver particles that are suspended in solution – only silver ions are dissolved. So TDS meters will only measure the ionic silver strength, not the colloidal strength.”

“TDS meters measure the conductivity of water, and convert ohms to ppm.”

“The CS that Spooky2 makes has an exceptionally high ratio of CS to ionic silver. The calculator takes the initial TDS reading (only the distilled water – this should be 1 or less) and compares it with the later/final TDS reading.”

“From the difference in readings, Spooky2 ascertains the true amount of silver (in ppm, or parts per million) that is in solution.”

“A more accurate way of determining the ppm is to use a multimeter set to milliamps.”

“Before you begin, set it all up and start a program using any dwell multiplier. Measure the current that passes through one of the rods by putting the multimeter in series.”

Entering this current value into the calculator along with the volume of the water will give a good estimate of the time necessary to make CS.

“The current that passes through the solution increases over time as more silver sloughs off the rods. The purpose of the 10k resistor is to keep the current more constant and low.”

“I’m making CS as I type this. The program has run for 191519 seconds, and the current has increased from 21 mA to 30 mA. It will take 360000 seconds in total to make four litres of amazing CS. This is just over four days. I don’t mind waiting. The job is slotted into my rig, and one generator dedicated solely to CS production is really a no-brainer.”

“Above is a photo I took last night showing the quality of my current batch. Remember, this is only halfway through production. The laser beam gets even brighter later. Ionic silver has no beam since it has no silver solids in suspension to reflect the light – because silver ions dissolve.”

“As regards using it, I don’t swallow my silver. I swish some in my mouth for two minutes, then spit it out. You can gargle it, too. The silver particles are small enough to enter cells directly.”

“I haven’t cleaned my silver rods at all and they don’t need cleaning.”

“And you don’t have to wake up every hour to stir the solution! Just get a magnetic stirrer. I forgot to mention that I use one of these set to approximately 4 RPM.”

“Later I’ll send a photo of the setup in its entirety.”

That photo will appear in the next edition of this guide.