Everything you wanted to know about Harmonics but didn’t want to ask.

This is one of those areas that is a bit misunderstood, as the term Harmonics is used in many areas.

When we use the term Harmonics, we are referring to the nature of frequencies (sound for example) where a harmonic is a division or multiple of the fundamental frequency. Oh boy, so what does this mean…  Well in practical terms, if you take the middle C note on a piano, which is 261.6 Hz, and you divide it in 1/2, you get 130.8 Hz. This happens to be a type of harmonic. It also just happens to be the frequency of the lower C note on the same piano. When you play both C notes, they resonate with each other.

Matter of fact, if you were to hold down the lowest C note on a piano in a way that it does not make a sound, and then play all the other C notes on the piano, while still holding down the lowest C note, you will find that the lower C note you were holding is now ringing out a low C. This is due to resonance and that the other C notes were upper harmonics of the same note.

Ok, so how does this apply to Spooky2?

Let’s say we are going to run a program with the frequency of 500 Hz.

We could just use 500 Hz in our program (our fundamental), or we can add say the 11th harmonic to it. The 11th harmonic is 11 times the fundamental frequency, so in this case 5500 Hz. This is what happens when we use the lower left option to Add F1 to F2, and we set the multiplier to 11.

Adding the 11th harmonic in this fashion is called frequency addition, as we are adding another frequency to the primary. The frequency we add is a multiple of the fundamental. So, essentially now you are getting two frequencies at a time. The one listed in the frequency set, and one that is 11 times the frequency.

When you listen to music, a single flute sounds nice, but a string of notes from say a piano or a guitar always sounds more full. This is because the notes played together are harmonious with each other. If you play a bunch of notes that are not harmonious, it sounds bad. By adding harmonics to a frequency, we aim to increase the range of tones generated that have the potential to resonate with the target.

So why consider other resonate frequencies. Let’s say we believe 500 Hz will impact our target, but in reality, 8000 Hz is the most potent frequency for our target. Well, 500 Hz will probably work, but it may just take longer. If we double 500 Hz four times, we arrive at 8000 Hz. So 500 Hz is 4 octaves away. Every time we get one octave away from the MOR, we loose power and effectiveness.

MOR stands for Mortal Oscillatory Rate. Essentially the one true frequency that destroys the target, not a harmonic that can still get the job done.

Many of the frequencies we use today are a result of research that was conducted perhaps with devices that had limitations on how high they could go. So a lot of the frequencies recorded may be a sub harmonic of the true MOR. Only Rife really had a way to find the true MORs by direct visual observation, for which he needed repeatability before recording.

So how about the Harmonic Type and how does this affect my Spooky2 program? Does it work to change frequency addition?

First a clarification. The Harmonic Type setting has nothing to do with the Add F1 to F2 feature. They both work with harmonics, but are self contained separate mechanisms.

The Harmonic Type only becomes active when we specify a frequency limiter or when we exceed the limits of the device we are using.

By default, the settings for frequency limits use > 0 and < 0 which means the full range of the device. For the XM, this is 0 Hz to 5 MHz (not taking into account wave cycle multipliers which I will leave out for now).

Depending on the harmonic type selected, different kinds of math will be performed until the frequency is within limits.

So let’s put this into practical examples:

This is over 5 MHz, so we will need to reduce it to under 5 MHz, but in a way that still allows the frequency used to be effective – a harmonic.

Octal Harmonics are based on powers of 2 — double or divide in half. This was the original default and matches my example earlier of the C notes on the piano. So if you had this set to Octal, it would use frequency 3750000 Hz or 3.75 MHz.

Let me show it this way. Let’s take 1 and double, then continue the sequence.

Taking the #s above, 2 and 8 are found in the Fibonacci sequence.

So by taking 2 and 8 from the above sequence, we find that F16 has both factors.

So using our example above, 7500000 Hz would be divided in half 4 times to arrive at 468750 Hz, which is what the generator will be instructed to produce. This is the same as if we just divide by 16, but wanted to show how it’s based on 4 octaves.

You will note that 2 and 5 are also in the sequence of Fibonacci, and thus we also have the Decade harmonic type. This setting will take the frequency and divide by 10. Of note, this is no longer following octaves and F10 is not part of the octal sequence. However, this is math we can do easily in our heads, where 7.5 MHz will now be reduced to 750000 Hz.

Essentially, the frequency will be modified by the following until it fits. Rather than using a constant, the modifier is variable.

The Natural Log and Scalar types have even worse math to perform and can be referenced in the user guide. They are there as other researchers are still experimenting with this type of frequency manipulation, however, it is up to you to determine if they have any merit.

So in the end, what you want is the MOR. If you are in a position where you can not generate the MOR, then you will want to use a frequency that is capable of creating a resonate response and that is not so far removed from the fundamental MOR that too little power is produced to do any work.

Frequency limits can be imposed artificially if you wish to try and remain in a specific range. Say you want all your treatments to be between 76000 Hz and 880000 Hz (HC range). You could put this into the limiter and then all frequencies in your program will be adjusted to fit using the Harmonic Type you select.

I purposely left out the use of wave cycle multipliers, but worth looking into if you don’t yet already know of them, as they allow the XM to generate up to 25 MHz without loss of power or accuracy.

The example picture is for illustration purposes only and how they fit into each other. 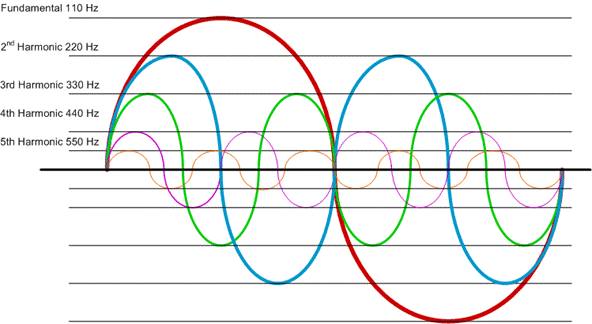