We have compiled this glossary of words and terms to assist you in understanding and using the Spooky2 software.

Amplitude is the total height of the wave being measured from the top peak to the neutral or zero. Here, we measure amplitude in volts, which describes the potential or electrical tension between the peak and zero. Amplitude as well as frequency applies to all the waves we are dealing with.

Alternating current (AC), represented by a sine wave, is changing amplitude and direction (from negative to positive) every half a cycle.

Will do another tip of the day to cover carrier waves in more detail later. 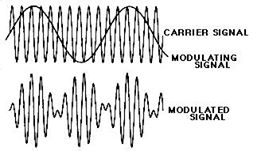 Duty cycle is how long the wave is on and off when running a frequency. A duty cycle of 50% means that the wave is on for 50 % of its cycle, and off for the remaining 50%.

Some rifers believe that to achieve the highest success rate, odd harmonics should be generated with a particular duty cycle —- the ratio or relationship (expressed as a percentage) of the amount of time an individual cycle or phase is on to the amount of time it is off.

A 100% duty cycle is straight DC and no longer has a frequency.

Warning: NEVER USE 100% DUTY CYCLE FOR CONTACT MODE TREATMENT – YOU MAY BURN YOUR SKIN SEVERELY. 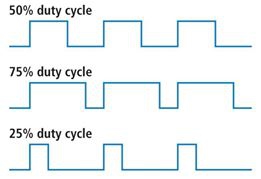 Dwell is the duration in time of each frequency. If you press the horn in your car for two minutes, the dwell will be 120 (seconds). A short honk for half a second will mean the dwell is 0.5. Each frequency in a set will be transmitted for the set’s default Dwell. Note that individual frequencies in a set may have their own custom Dwells assigned.

This is the number of times a waveform pattern repeats every second. The units of measurement are in cycles per second (CPS) or Hertz (Hz), but the term Hertz is most commonly used today.

Some rifers feel that pathogens can become too accustomed to frequencies and then adapt in ways to overcome the effect of the signal. With the Gate pulsing on and off, the theory is that this signal variance prevents this from happening.

This is another option I’ll try to cover in more depth in another tip of the day.

The example picture is for illustration purposes only and how they fit into each other.

A Rife machine will have no side effects, but may create a healing crisis, otherwise known as a Herxheimer reaction, a detoxification response. Excessively large amounts of microbial cell waste and toxins hinder the body’s ability to adequately eliminate it through the usual channels (breakdown by the liver, through the colon or urinary tract).

So instead, the toxic material is discharged through the lungs, sinuses and skin. Symptoms can include a flu-like condition, heavy perspiration and night sweats, fever, with or without chills, headaches, malaise, diarrhea, nausea and vomiting, pain in joints and bones, and itching, flushing, and reddening of skin.

The frequency (rate) at which a particular pathogen or target is resonant to the point of devitalization or destruction, or an organ or system is stimulated to bring about an overall beneficial effect via frequency entrainment.

Consider when a singer hits the right note and shatters a glass. This is a good example for destroying a pathogen.

This is the imbalance between positive and negative peaks in reference to neutral or zero. Offsetting the signal from zero (neutral) means moving the waveform into the positive or negative region.

You can visualize this by imagining horizontal X and vertical Y axis with sine wave crossing X. If both peaks are in equal distance (magnitude) from the X axis, then offset is zero.

If we apply a positive DC offset to a sine wave, the wave will shift upwards – refer to the graphic below. Offset can have either positive or negative value.

When one object is vibrating at the same natural resonant frequency of a second object, it forces that second object also into sympathetic vibrational motion. So if there are two similar objects, and one of them is vibrating, the other will begin to vibrate as well, even if they are not touching.

A good example is two identical tuning forks. If you tap one of these forks on a hard surface so that it rings, its vibrations will pass through the air and cause the other tuning fork to vibrate. The energy from the first tuning fork has been transferred to the second tuning fork.

These physically connect to the body via hand electrodes, footpates, foot-tubs, or TENS pads. Electric current carries the audio frequencies into the body to cause vibration and resonance. These devices transfer their energy through the skin and have some limitations as regards full body penetration.

Since the body is a semiconductor with approximately 1 million ohms of resistance, penetration of contact energy is somewhat limited unless a radio carrier is also used.

Do not use a contact device if you are wearing a pacemaker or have a heart condition.

A plasma device uses a tube (similar to a fluorescent lighting tube) which works as an antenna and transmits the frequencies using both electromagnetic energy and photons. This causes resonance or vibration of one or more of the components of a targeted pathogen and brings about its devitalization.

A gentle undulating waveform that appears most often in nature. Useful for healing applications. A sine doesn’t contain any harmonics.

What should be noted here is the exceptionally fast “rise time” and “fall time” (also known as “decay”). Rise time is the front (or leading) edge of the square wave. The fall time is the trailing edge of the waveform.

In a theoretical world, the rise and fall times would be 0, or instantaneous. The square waveform is chosen above all others because of this unique time characteristic. It is believed that most pathogens mutate and eventually become used to or immune to waveforms with slow rise times or decays.

A sweep can be compared to the windshield wipers in your car. They start from one position and move to the other. Both points can be referred to as starting and ending frequencies, depending on the direction of the sweep.

There is one more variable here which determines how slow or fast such a sweep goes as it moves in incremental (or decremental) steps. These steps are increments by which a sweep progresses. If this value is 1Hz, then the sweep will proceed in 1Hz steps, eg. 292–293–294, and so on.

The triangle wave contains some harmonics, the majority of which are clustered close to the fundamental frequency. Almost all of the wave’s power is within this cluster.

A waveform is simply a graphical plot of amplitude or relative amount of energy (voltage in this case) over time. The amplitude, or power, is typically displayed on the vertical scale, and time on the horizontal scale.

With spooky, we work with simple repeatable waveforms. Waveforms can also be very complex as the following picture depicts.

Takes every frequency and changes to another harmonic. Useful for raising entire frequency sets to a higher subharmonic. Careful that the multiplier doesn’t push frequencies outside generator’s capability (5 MHz). See WCM for pushing past this hard limit.

Example of use (Frequency Multiplier):
You are running the Rhinitis frequency set. The frequencies listed are between 20 and 1550. You feel that for whatever reason they are not being very effective and wish to try a higher subharmonic. Instead of creating a new frequency set by hand, you set the Frequency multiplier to 64. Now you are working with frequencies between 1280 to 99200. For whatever reason, you find this works better for you.

Wave cycle multiplier (found next to each waveform) allows you to transcend the 5 MHz limit. It doesn’t actually change what frequency is transmitted in the end. If you are going to transmit say 300 Hz using a WCM of 1, the generator will show 300 Hz. If you use a WCM of 3, then the arbitrary wave will have 3 waves embedded in the waveform, and the generator will then show 100 Hz. 3 x 100 = 300. Useful if you want to transmit above 5 MHz. Note: pushing past 25 MHz in this manner will start to show degradation in the waveform and signal power.

Example of use (WCM):
Let’s say you want to use the essential oil frequency sets. Many of these are above the 5 MHz limit. If you use this with a WCM of 1, then the sets that are above 5 MHz, will be divided in half (subharmonic) until it is below the 5 MHz limit of the generator.

Phase Angle would be useful in very experimental setups. Say for instance you wish to run the same frequency on both Outputs, but do not want to use the inverse+sync option (which applies a 180 degree phase on Out 2). Instead, you wanted to experiment with Out 2 being 90 degrees out of phase with Out 1, you would use this option. Since Out 1 and Out 2 vary in phase, they will not cancel out like when you use Follow out 1. There is a lot to cover regarding phase, but I hope you get the idea from the above.

One clarification for those who may be wondering. The boost imparts a 180 degree phase change on Out 2 by the way it is wired. When you have two waveforms 180 degrees out of phase from each other, and everything else matches and the outputs are synced, they will cancel out. This is why Follow Out 1 results in no signal when using the boost.

When we use inverse+sync, we first invert the waveform (same result as using a 180 degree phase change), and then the boost imparts its 180 degree phase change, we then have two waveforms that are in back in phase (360 degrees same as 0). Normally this would just result in the same waveform with the same amplitude. However, because of how the boost is wired, sharing a common ground, we actually double the amplitude.

If you know the light wavelength for something you wish to create a frequency for, say Colloidal Copper which has been calculated to have a wavelength of 572 nanometers, instead of you having to do the math to convert this into a frequency and then find a sub harmonic that can actually be generated (requires one to start out with exponential numbers in most cases), you could just enter L572 and Spooky2 will do all the math for you. You can look up the wavelengths of many known items using Google in many cases, including the very basics, colored light.