When you perform a biofeedback scan or a grade program operation, the list you get back will be ranked from highest to lowest based on the operation in use.

When comparing the result sets if you are not going to keep the entire set (remember those hits were already filtered out of all frequencies tested), then you could use statistical methods to trim.

This is best applied when you do a grade program operation. Let me give you some examples:

When performing a biofeedback scan of 76000 Hz to 152000 Hz using a step size of 20 Hz, you are scanning 3,800 frequencies which comprise an entire octave range. If you asked for the top 20, you are only getting back 0.53% of all frequencies in your result set and it most likely would be wise to keep them all. Since no frequency was skipped using a step size of 20 and based on MOR tolerance of 0.025%, and due to resonance, the results returned are going to be all relevant to your body.

If you use a grade program operation, you are examining the viability of a predetermined set of frequencies in a frequency program. Let’s say you decided to grade Arthritis 2 (XTRA) which has 37 frequencies in the set.

The list will be returned to you ranked. In this list you see that 20 frequencies all have values above 60, but the last 17 drop off considerably. This could be an indication that only 20 of those 37 frequencies resonated with your system and would be the 20 to keep.

If I grade 5 vitamins, I may find that 3 responded much better than the other 2. So I will know at the very least that 3 of the vitamins had a larger impact on my system whether they are needed or not.

With only 5 vitamins, it probably would be better to just run all 5 and let the body take what is needed rather than select to only run the top 3.

However, if I have 100 vitamins, then grading becomes useful.

I know that 80 frequencies at 3 minutes each is a 4 hour program, so I can’t use all 100 in a remote loop effectively. I could then elect to take the top 80 and keep within the 4 hour limit.

However, when I grade the 100, I find that 25 frequencies all had a high response, and then the other 75 were significantly lower in response.

I may then choose to just take those 25 that ranked much higher and run those. This is a form of statistical trimming.

You now also know the difference between a biofeedback scan and a grade program operation (which used to be called quick scan). 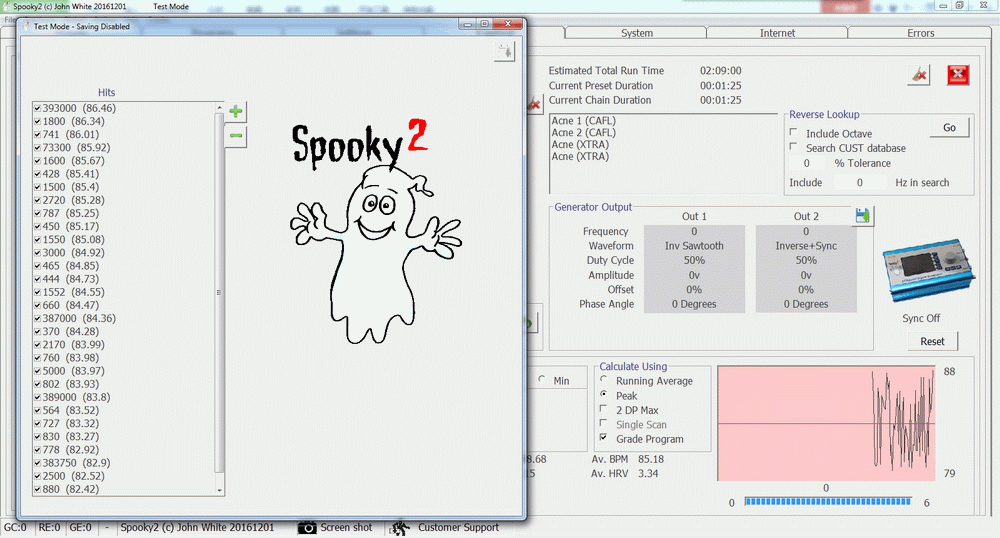