We’ve just uploaded the 1 June release of Spooky2, together with the updated Spooky2 User’s Guide and an updated database to the usual place:

In addition, there is also a new Italian language version of the software, thanks to the esteemed Marcello Allegretti.

Changes for this month are:

New: added Preset – JW-Spooky Coil (XM Direct). This converts the generator output to a powerful magnetic field, and the coil may be connected to BN, MN, or High Power (Spooky Boost 3.0) outputs for extra power.

Improved: changed position of Channel Control panel so that the Channel buttons are all now visible when the panel is opened. The version text in the Toolbar has also been raised.

Improved: Outs pane – the Hz checkbox is now disabled when Inverse+Sync or Spike+Sync are enabled.

Improved: Status Bar – the TE and WE fields have been removed as obsolete. Code improvements now mean that Timer Errors or Write conflicts are no longer possible.

Database: entries from A-U now have verbose Additional Notes, with additions and corrections.

IMPORTANT: all users currently running the Full Terrain Protocol Preset should pause the Channel, note down the position reached, do the update, then resume where they left off.

This is to allow the newly-expanded Spooky Core team the time and breathing space required to work on a number of important new Spooky projects. 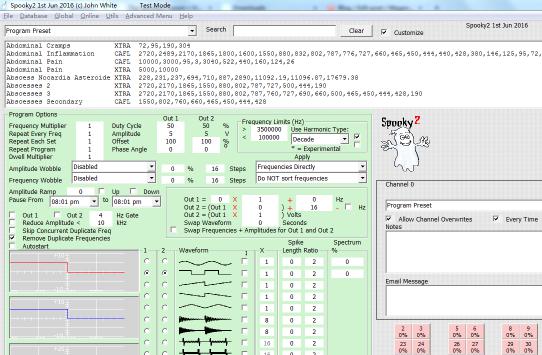