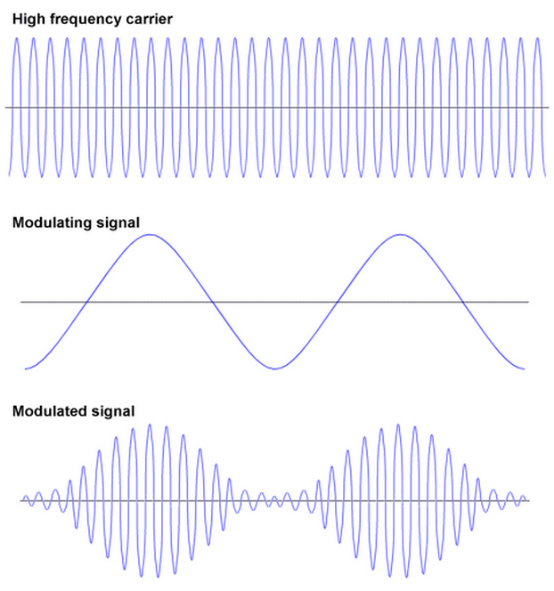 There are two types of carrier, fixed and dynamic.

A fixed Carrier uses a fixed high frequency to transfer low frequencies. Transmitting on a carrier frequency can waste a lot of power. When modulating a carrier, hundreds of sidebands are created that do nothing, except for a lucky one that hits the target frequency. Unfortunately, not much power is focused where it is needed.

For example, let’s start with a carrier frequency of 3.3 MHz as used with the Aubrey Scoon 1930’s Beam Ray Clinical Rife Machine replica. If we modulate this with a frequency of 21275 Hz, the following frequencies are produced. Note that this list is not comprehensive and does not take into account harmonics that may be generated if say using a square wave. Only the first 5 upper and lower sidebands are listed. Also note for the example, I will single out 1607450 Hz as the MOR for BX and discard the other values we have from Rife.

What we see here is that the 4th lower sideband of 3214900 Hz is twice that of the BX Frequency of 1607450 Hz. If we were targeting BX, this would probably do the trick. The indentation represents how power is lost on each subsequent sideband. Note that the frequency of 21275 Hz will never be created unless if by harmonics, as 21275 is not one of the generated sidebands. Even if it was, it would have insufficient power to even be considered louder than background noise. 21275 Hz is not even a integer factor of 1607450 Hz. This illustrates why 21275 Hz by itself would also not treat BX, but requires a carrier of 3.3 MHz.

Most Rife systems using a fixed carrier wave, that is, the carrier is only one frequency. With Spooky, you can have a carrier wave that changes every time there is a new frequency, based on a multiple of the original frequency.

There are two definite advantages of the Dynamic Carrier over fixed carrier.

The first advantage is that the carrier is moving. A single frequency is not going to be hitting the body long-term, so there is no damage from a fixed frequency.

The second advantage is that the dynamic carrier is a harmonic of the “active” frequency that is being sent, so any power in the carrier is also useful for whatever is trying to be done. This means that all of the power is useful in the process, as well as being useful for assisting the Plasma bulb be at the correct range. The energy penetrates the body more easily.

As we known, carrier waves allow frequencies to penetrate the body better. However, they are not necessary for Remote Mode. But using one will make the signal more effective. In Contact Mode, you may use a dynamic carrier. This will not only carry the encoded fundamental frequencies, but also act as a powerful additional “left hook” in itself. Dynamic carriers help to reduce muscle contractions and tingling sensations associated with the low frequencies used for healing and detox programs, which would otherwise make a Contact Mode session quite uncomfortable.

You can check how to add a dynamic carrier for contact mode from this blog:
https://www.spooky2-mall.com/blog/how-to-add-a-dynamic-carrier-for-contact-mode/

Thanks for Jeff Kaczor and Joe Strothman